They definitely do come and go but this year it has been quite strange, we had loads of snow at the end of November and start of December and we actually went up into the mountains snowboarding which we have never managed that early in the season, it did not last for long and that is how the winter was for the next three months, we had snow for a week or two then the grass would be showing and that happened on a fairly regular basis.
The ski-ing/snowboarding was good, the resort has been pretty busy all season and I managed to go most days, I missed a week in February when I caught a very nasty virus which didn’t want to go away and is still hanging about even now, Maria had it too but still managed to get to her teaching, determination had a lot to do with that I think, but the season has just about finished and the rain we have here today should wind it up which is good as Maria is going for her knee op on the 6th April and she could do with a bit of a break before it. 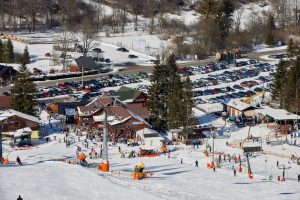 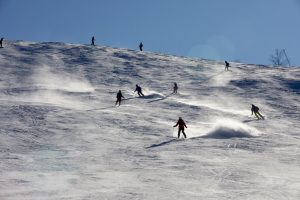 One of our ewes had triplets and they are all doing very well, the other ewe is due in a couple of weeks time, the garden is starting to wake up and crocus are appearing, we have sown some seeds indoors ready for the greenhouse, we have our onion sets and seed potatoes ready but we will not be doing much till the start of May as we always have mean frosts in April. I haven’t taken many photos over the last couple of months but we are hoping to get out and about this year as we are not doing any construction work like the last couple of years, so watch this space. 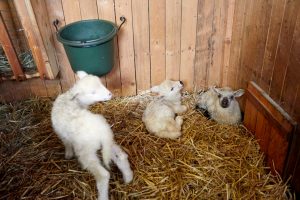 Here is a picture of the lambs, they have grown quite a bit more now and we hope to get them outside later this month, thats it for today, enjoy Easter everyone…