It is true, our life here is very good and I have to say I cannot believe how long it has been since my last blog, too long I guess.
We have had a very varied time since last I wrote, the garden recovered amazingly from the storm, it was almost as though it was saying “you need to do better than that to stop us plants”  and they came back with a vengeance, the shrubs and perrenials bloomed, the veg garden just kept producing, even though we have had frosts the rassberries have given us a good bowlfull every day for the past two weeks, as you can see our onion and garlic crop was very good indeed. 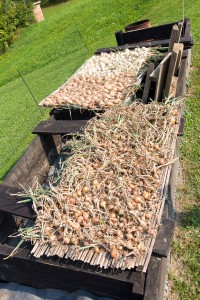 The climate here has been ridiculous with temperatures going to the top end of the +30c range through most of August and September, in one week it went from 36c to 5c and then on the 12th of October we had our first snow, not great amounts but it is still on the mountains today, we had a light dusting on the rooftops which soon went when the the sun came out. 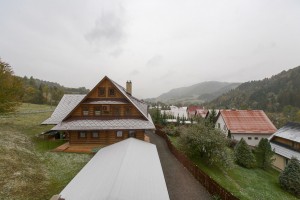 We had a brilliant time with our fruit and veg picking which resulted in record numbers of preserves, we made 149 jars of bottled fruit, jams and chutney’s plus we have a ton of dried and frozen fruit and veg, so what started as a disaster with the hailstorm ended very well, the wild fruit was terrific and we picked over 5kg wild Strawberries and 7kg wild rasberries, towards the end we went into the mountains to pick Cranberries in what can only be described as gale force winds during which we had to stop the fruit from blowing away before we got it into the containers.   Just watch this short clip

We have a new ram who we hope is doing the business and next month we will be putting them inside for the winter, our rams will go in the freezer and the ewes will hopefully produce lambs in Feb/Mar next year, here is a picture of the covering ram who belongs to a friend of ours. 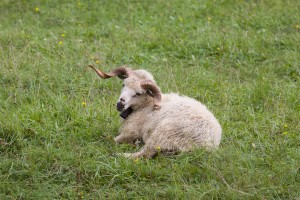 So here we are busy packing all our stuff up, we have to clear away everything from our patio including the trellis, furniture and plants which all get stored till spring, the garlic will go in the ground tomorrow and we cover it with conifer branches for frost protection, it all happens so fast here, one minute we are sitting looking at the garden next we are waiting for the snow, it really is very nice to have seasons that start and finish when they should, last picture is of the forest up in Vratna, wicked clours eh!!!!! 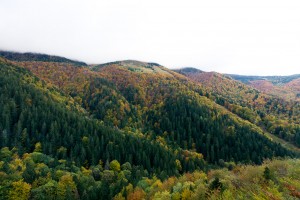