What else could I start with, on the 21st July I was at home and we had the most unbelievable storm, very heavy duty lightening and torrential rain.  In the evening we are told on the PA that there is bad flooding in Terchova (where we live) town centre, we went to have a look and there was a lot of damage but later we find out that it has been much worse up stream in Vratna which is the ski resort and very popular with walkers in the summer. It appears that what happened was, up in the mountains there was a landslide which formed a lake in one of the valleys, this quickly filled with rainwater and then burst, the resulting torrent swept down the valley taking trees and millions of tons of earth and rocks, when it got to the ski lift it took loads of cars from the car park and some were found 2 or 3 km down stream, I went with Maria early the next morning and took photos of the devastation, here are some of the pictures the rest are on www.mikesimages.co.uk have a look it was very sad to see. Fortunately, to date there have been no reports of casualties..

The roads were nearly all gone. 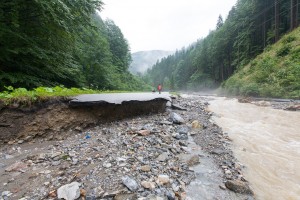 The car park and the bottom of the lift, there is approx 3m of rock around that pillar. 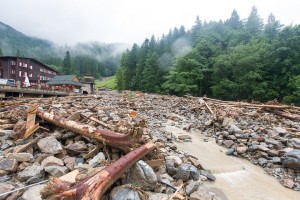 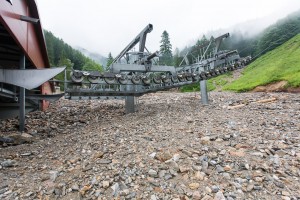 This is just a couple of the cars taken by the water, it never amazes me what power nature can unleash at times, makes us very small and insignificant. 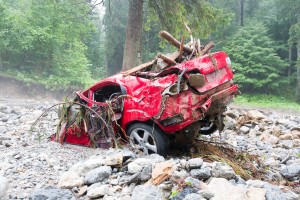 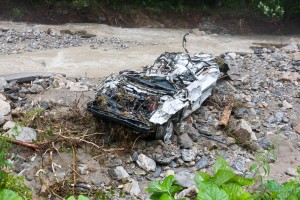 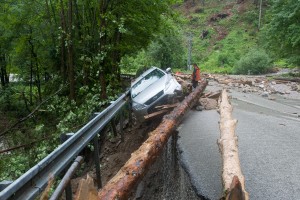 The rest of our time has been spent gardening and picking fruit and mushrooms, here are a couple of pictures of the mushrooms we managed to find, it has been good for them this year, so hot and very humid, Maria sautes  and freezes them. 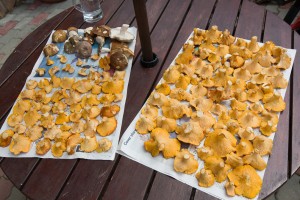 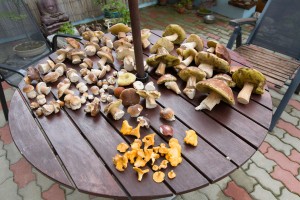 Maria also hand sheared the sheep and it proved to be very interesting when she did the ram, it ended up me holding him down, then on the Saturday someone rang and asked her to come and shear his six lambs, that kept her busy for the morning. Here she is just taking a rest from the wrestling match…..he is a big boy though. 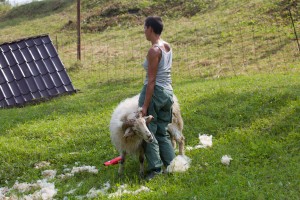